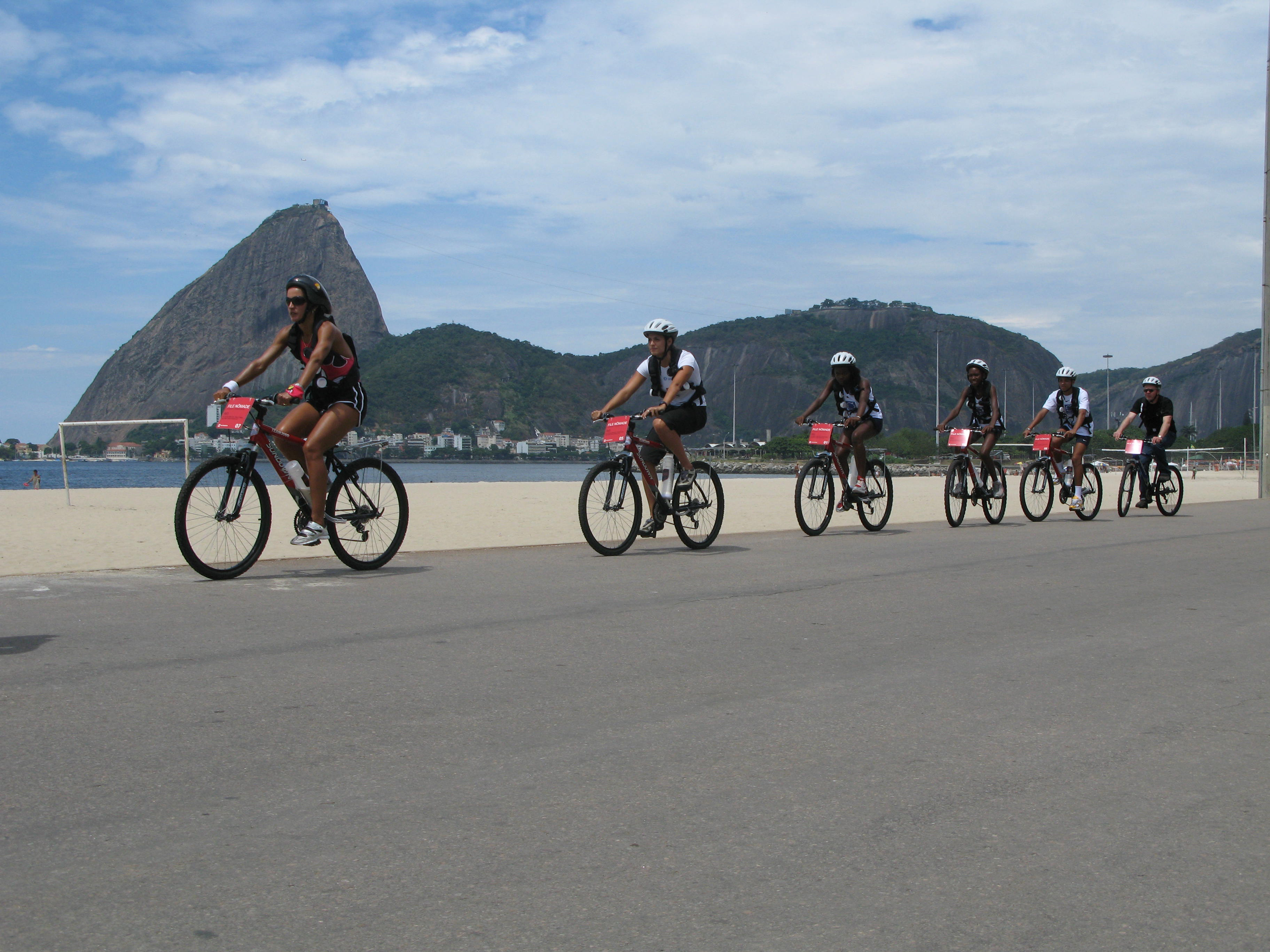 PED is a collective that makes participatory bicycle-driven art projects operating in public space. Each project is created specifically for the varying location and situation, and is simultaneously a pseudo service bureau and an info/excer-tainment outlet from which visitors/ participants may embark on free, talking-bicycle ‘lecture’ tours. In some PED projects, each bicycle is outfitted with a pedal-activated audio system (i.e. as the participant pedals, they hear the lecture, and when they stop the lecture ceases), while in others, the audio is transmitted via electronic communications devices/systems such as walkie-talkies and GPS. The series expands the parameters of performance by engaging viewers as agents as they conspicuously ride through the city on the talking-bicycles, disseminating information by publicly broadcasting the lectures.

PED.Chongqing (June 2006, Tank Loft Arts Center, Chongqing, China) introduced collective teams as the riders of custom audio, 6-wheeled, cart-pulling bicycle systems built from salvaged bicycle parts and hacked megaphones. The vehicles were capable of large-scale public address. These human-driven machines broadcast audio via karaoke-inspired lectures, spreading information and entertainment in a new/ancient society. The three tours were: The Long, Long Virtuous Path to Sunshine Vehicle; The Twin Stacks of Supreme Happiness Vehicle; The Vehicle for Ten Thousand Fertile Scholars’ Star Rated Market Approved Big Shiny Hot Pot for the Benevolent Ghosts from the Immortal Mountains of the Healthy Valley of Plenty. PED.Chongqing was completed by an expanded PED team including 38 students of the Sichuan Fine Arts Institute. It was realized in cooperation with Chongqing 955 Bicycle Club and the International Long March project.

PED.Rio (March 2007, FILE-Rio 2007: Electronic Language International Festival, Oi Futuro Cultural Center, Rio de Janeiro, Brazil) continued the focus on global issues on a local level, seeking to distill issues of trade between the northern and southern hemispheres through the use of metaphor. Sugar, poetry, popular music, a dubious love duet and walkie-talkies were the tools used to guide the rider/transporter along the PED.Rio trade route. For the first time, PED utilized live voice transmission, layered on top of the pre-recorded soundtracks, to communicate with the riders. As a self-reflexive agency, PED acknowledges its complicity in the market of cultural exchange but sees invitations as opportunities to discuss and frame important global issues. Bicycles and walkie-talkies are considered low-tech technology at this point in history but continue to serve as common devices for urgent communication.

PED.St. John’s (June 2008, Sound Symposium, St. John’s, Newfoundland, Canada) utilized stereo radio transmissions, each broadcast on a different frequency, engaging riders who eavesdropped on a conversation between various characters (humans, non-humans, even phenomena) throughout the history of Newfoundland. This conversation was filled with misunderstandings, lost signals, faulty transmissions and disagreements across time. The shadow of Guglielmo Marconi’s historic lighthouse loomed large. The persistent beeps of his Morse code punctuated the dialog and the booming horns of freighters in the harbor periodically obliterated all narrative.

PED.Toronto (Summer 2016, Koffler Art Gallery, Toronto, Canada) consisted of a series of three bike tours through Toronto’s West Queen West area that examined the city’s shifting identities, multi-faceted realities and imagined potentials: Toronto the Good incorporated literary and filmic references revealing this city as a place rich in its own stories as well as a cinematic stand-in for other cities; Toronto the Better focused on the current streetscape and local culture of the sites, start-ups, outreach organizations, businesses and personalities in the area; Toronto the Best offered riders a transformative experience, channelling science fiction into a call to action for Toronto residents, whether they are long-time, new or even yet unforeseen citizens. Converted into the PED Station and Museum, the Koffler Gallery served as a bicycle terminal and information hub, where multimedia displays featured a retrospective of past PED projects and a live feed observation centre that extended the outdoor experience and interactive engagement with the city.