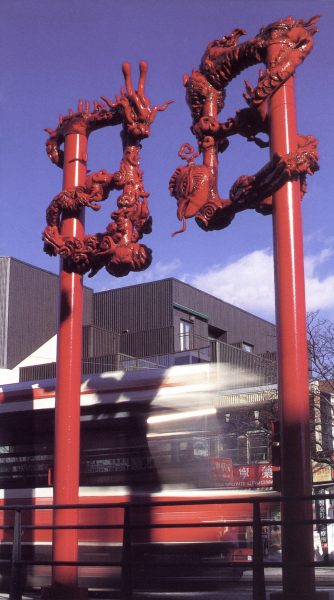 This pair of allegorical entrances were created to identify the environs of Toronto’s Chinatown, the neighbourhood name for this now predominantly Asian community. Gateway is based on the ancient script form of the Chinese characters for’ gateway’ and uses the supporting poles as part of the calligraphic notation for the word. The upper portion of the character depicts an intertwining and metamorphosing of four venerable mythological figures which have been cast in fiberglass: Feng Huang (associated with the Phoenix), Long (Dragon), Sun Hou Zi (Monkey King) and Qilin (associated with the Unicorn). This linguistic lexicon has the same meaning in Korean, Japanese and pre-colonial Vietnamese, reflecting historic as well as contemporary cross-cultural pollinations. The metaphorical gateways signal the transition of one community into another and reflect the social heritage of Spadina Avenue, where traditionally one culture displaces another as new waves of immigrants arrive in the city.